The chloralkali process is an industrial chemical process for electrolysis of sodium chloride to obtain a highly concentrated commercial sodium hypochlorite solution.

The electrochemical process is conducted on an aqueous solution of sodium chloride to obtain sodium hydroxide, hydrogen and chlorine, obtaining sodium hypochlorite.

The sodium hypochlorite produced has a concentration between 12% and 16% in volume/weight. It has various applications, including bleaching in the paper and textile industries, production of household bleach, removal of nitrogen from sewage (nitrogen break-point). 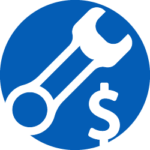